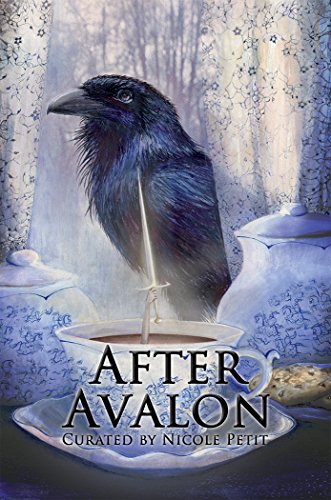 These are the stories of what came after.

Merlin’s prophecies begin such, in introduction:

“In the days when Arthur’s dream was dimmed, as grey embers under storm, actors from our reverie still acted. A boy ventures into decaying Broceliande with the May Hawk’s daughter, both in search of fathers. Sir Gawain, bereft of his nation, rides in search of my tomb—but finds a friend turned enemy. In the Britain’s hour of need, the round table will be restored to defend Logres in the sky, in the London Blitz.

“My tutor, Bleys, will take a fool’s horse, and two adventurers will trace my dying steps across the world. Sir Lionel’s remains will visit the remains of the Arthurian world, and the Victorians will strive to make a gentleman of Mordred. The Questing Beast will never cease to haunt Pellinore’s line, no matter how far north they trend. The old witch, Morgan, will seek forgiveness. The holy lance will appear once more. And a queen who is no longer a queen will meet a knight who is no longer a knight, and both will marvel at the grave of the greatest king who served his country.

“These may be read, in full, inside.

“But I am tired now, and Nimue calls for me…”

Check out a review of the book

“The May Hawk’s Daughter” – Colin Fisher

“The Hour of Their Need” – Amy Wolf

“The Knight of the Ice Moon” – Patricia S. Bowne

“The Hammer and the Spear” – Patrick S. Baker

“Forsaking All Others” – Elizabeth Zuckerman