Welcome to the third Medieval Book Club post on this blog. Here I will share some of my thoughts on the book, some observations on the material itself, and open a few questions toward you, the reader.

In case you missed it, for April we’re going to be reading two Anglo-Saxon Poems: Exodus & Daniel. Those poems are ones you can read free online, just follow the link to my preview post and you will find the link there to the poems. I hope you can join me for next month’s discussion as well, and I’ll be keeping this going all year long with posts on every third Thursday of each month in 2017.

My Thoughts: I knew, from the table of contents, that this book would not end up being what I had expected. My expectation was a book that introduced readers to some of Lewis’ own thoughts and insights on major literary works from the Medieval and Renaissance eras. Something that you would expect to find in an introductory course on the topic, sort of a guide through the books that everyone should start with when reading in those time periods. And boy, was I far off the mark. Yet I have never been so glad to have been so wrong, because this turned out to be a fun, engaging, and insightful read!

There were many quotes that stood out to me as I read the book but, unfortunately, I am not a great note taker nor a highlighter as I read so they have all vanished from my memory bank. I am hoping some of you can share some of your favorite quotes. But one in particular, very early in the book, struck me as interesting and so I diligently went back to the book and found it again to share:

“Every writer, if he possibly can, bases himself on an earlier writer, follows an auctour: preferably a Latin one. This is one of the things that differentiate the period almost equally from savagery and from our modern civilization. In a savage community you absorb your culture, in part unconsciously, from participation in the immemorial pattern of behaviour, and in part by word of mouth, from the old men of the tribe. In out own society most knowledge depends, in the last resort, on observation. But the Middle Ages depended predominantly on books.”

When you think of the Middle Ages, odds are you don’t think of a bookish culture. Or, at least, you didn’t until you read this book. I know I certainly did not, as the literacy rate was certainly not as high as it would be today. Yet it also makes some sense. You see a lot of works being generated which refer back to, draw upon, or modify preexisting works. As Lewis mentioned late in the book, originality and novelty were not valued among writers during that time. They would have been baffled at our current need to write something completely new and fresh rather than building upon the great works that came before us. And this is one place where I, as both a reader and a writer, wish we could shift back toward at least a little. Fairy tale retellings is a popular trend, as is working with placing mythologies in modern settings, but as a whole we fall victim to a “Cult of the New” where we always want something that we’ve never seen before or heard before or read before.

And this was characterized in these quotes:

(discussing how Medieval authors, despite the rarity of books, often presented or repeated things their audience already knew): “One gets the impression that medieval people, like Professor Tolkien’s Hobbits, enjoyed books which told them what they already knew.”

(discussing the prevalence of additions to not-necessarily-original works in the medieval): “One is tempted to say that almost the typical activity of the medieval author consists in touching up something that was already there.”

Another quote I enjoyed, which I rediscovered via a Google search on quotes from this book:

“A good medievalist (A. J. Carlyle) once said in my hearing, ‘The typical Knight of the Middle Ages was far more interested in pigs than in tournaments’.”

This ties in with Lewis’ discussion about how our idea of that era comes from the Romances and Ballads that were not the works that truly characterized the period. They are closest to our modern tastes in terms of the works produced, but they would not have been heralded by the people of that period as being their most important works. So the Arthurian romances, among others, where knights rode from tournament to tournament and sought challenges to prove their bravery were not accurate representations of how things truly were. That absolutely fascinated me, and at the same time makes perfect sense.

All in all, I must echo what Lewis confessed at the end:

“I have made no serious effort to hide the fact that the old Model delights me as I believe it delighted our ancestors. Few constructions of the imagination seem to me to have combined splendour, sobriety, and coherence in the same degree. It is possible that some readers have long been itching to remind me that it had a serious defect; it was not true.”

This book centered around what the people of that time believed and how that Model shaped their perspective toward the world as much as toward their own literary works. This was Lewis’ final book that was published, and it certainly stands as a masterpiece in my opinion, a blending of his lifetime’s achievement as both a Medievalist and as a Christian because in many sections he is able to bring those two things together in presenting that Model. I am often overawed when I read the nonfiction of C.S. Lewis, and I marvel at the brilliant mind that penned so many works. I hope to one day possess a fraction of the knowledge and insight that he had.

So my overall thoughts were very positive. This book was not at all what I expected and the only author I was familiar who had a section in there was Boethius. I had anticipated coverage of the greats like Chaucer, Dante, or Gower and, while they certainly had mentions throughout, as a whole he seemed to touch upon the lesser-known yet still impactful authors who shaped and/or represented the views of the men and women during that period.

What quotes stood out to you? If you were to take an introductory course on Medieval and/or Renaissance Literature, do you think this would be a good book to consider having on the syllabus? 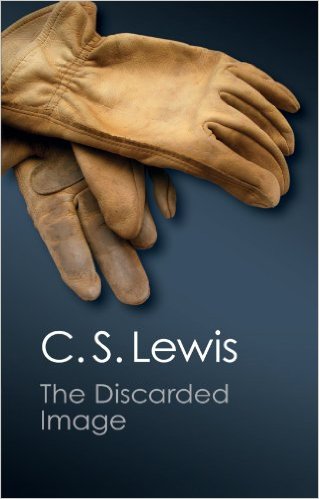 The Discarded Image paints a lucid picture of the medieval world view, providing the historical and cultural background to the literature of the middle ages and renaissance. It describes the ‘image’ discarded by later years as ‘the medieval synthesis itself, the whole organization of their theology, science and history into a single, complex, harmonious mental model of the universe’. This, Lewis’s last book, has been hailed as ‘the final memorial to the work of a great scholar and teacher and a wise and noble mind’.

This is the third entry into the monthly Medieval Book Club, and this is one of the ones I am most excited to read. Why? C.S. Lewis was not only an author of excellent stories and one of the brightest layman Christian writers of his time. He was also a Medievalist, and so any chance to look at his thoughts about the literature of that period is something I get excited about. This is tagged as an introduction to Medieval and Renaissance Literature, and I fully expect about 70% of what he discusses to be above my own level of understanding because this man was intelligent on a level I could never hope to achieve. Yet I hope it will be worthwhile to wade through his work and, hopefully, walk away a little brighter than I had been in the beginning. Here is the breakdown of chapters:

Will you join me in reading this book? You can pick up a copy on Amazon at this link. The post for this book’s reading will be on March 16th, which is the third Thursday of that month.

Check out the full list of books we’re reading this year for the Medieval Book Club.