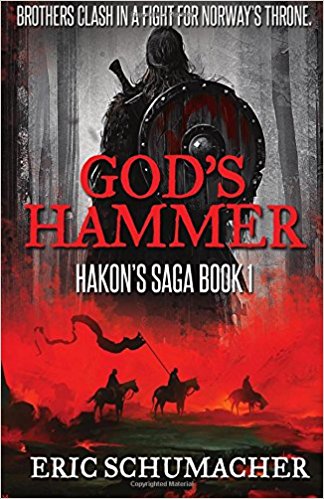 Blurb: History and legend combine in the gripping tale of Hakon Haraldsson, a Christian boy who once fought for the High Seat of a Viking realm.

It is 935 A.D. and the North is in turmoil. King Harald Fairhair has died, leaving the High Seat of the realm to his murderous son, Erik Bloodaxe. To solidify his claim, Erik ruthlessly disposes of all claimants to his throne, save one: his youngest brother Hakon.

Erik’s surviving enemies send a ship to Wessex, where the Christian King Athelstan is raising Hakon. Unable to avoid his fate, he returns to the Viking North to face his brother and claim his birthright, only to discover that victory will demand sacrifices beyond his wildest nightmares.

I was swept up in the action and enthralled by the descriptions of Hakon’s struggle. -Roundtable Reviews-
I highly recommend this historical fiction novel, both for its entertaining story and historical information. -Historical Fiction Review-

My Take: This book gripped me from the first chapters and never let me go. The further I got into the book, the harder it became to put down at the end of a lunch break or when it was time for bed. The appeal in the book was more than the excellent immersion into medieval England, Viking culture, and the conflict of a Christian King ruling over a pagan group of people. The storytelling and character development were excellent, making me care about Hakon and those he came to care about along the way.

The historical expertise of Mr. Schumacher is on full display throughout the entire story. He manages to make the period of history come alive, complete with the conflict that surfaced as Christianity and Paganism clashed. Hakon himself is an outcast everywhere he goes: his story begins as a Pagan child coming to serve under a Christian king. When Hakon’s father dies, he returns to his homeland as a Christian leading Pagans. And this is where the greatest conflict arises, and is handled quite well along the way. By the end of the book, there isn’t some magical conversion of the entire country, so there is promise for continued tension in the sequel.

Overall this was one of my favorite reads of the year. It has great historical immersion, an engaging plot, internal and external conflict on multiple levels, and complex characters. What more could you ask for from a book? I’m very much looking forward to reading the next book in the series to see what happens in the aftermath of God’s Hammer.

Follow Author David Wiley on WordPress.com
Sign up for my Author Newsletter in order to stay up-to-date about new releases, promotions, and giveaways.