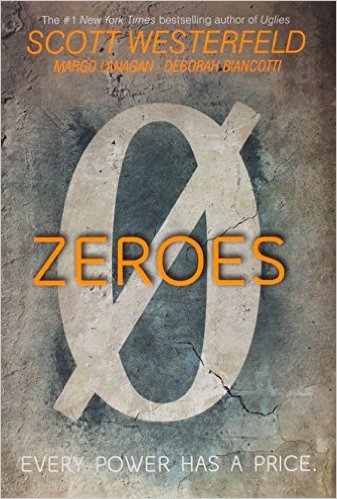 But these six Californian teens have powers that set them apart.

Take Ethan, a.k.a. Scam. He’s got a voice inside him that’ll say whatever you want to hear, whether it’s true or not. Which is handy, except when it isn’t—like when the voice starts gabbing in the middle of a bank robbery. The only people who can help are the other Zeroes, who aren’t exactly best friends these days.

Enter Nate, a.k.a. Bellwether, the group’s “glorious leader.” After Scam’s SOS, he pulls the scattered Zeroes back together. But when the recue blows up in their faces, the Zeroes find themselves propelled into whirlwind encounters with ever more dangerous criminals. At the heart of the chaos they find Kelsie, who can take a crowd in the palm of her hand and tame it or let it loose as she pleases.

Filled with high-stakes action and drama, Zeroes unites three powerhouse authors for the opening installment of a thrilling new series.

My Take: Short version: I loved this book. It is exactly the series I needed to read before getting to finish reading Brandon Sanderson’s Reckoners series because I realize now I need a steady flow of new YA superhero novels to keep coming. Because they are awesome and exciting and full of fun in a way that is completely different from watching the latest Marvel movie or binge watching their latest TV show. If this isn’t a thriving subgenre already, Sanderson and Westerfeld will have breathed life into that subgenre.

If you are like my wife, who hates shifting viewpoints with each chapter, this book will drive you crazy. After all, there are six main characters who all share a portion of the spotlight over the course of the book. Some of them are featured in more POV chapters than others, which makes perfect sense as you get further into the story. But all of them seem to be rounded out as characters and I finished with a perfect sense of who all of them are and what it appears each one of them wants. The book begins with a team in dysfunction, having broken up a year prior to the beginning of the book. So immediately you sense that the arc is going to involve the team getting back together and becoming Zeroes again. But a lot of dynamics complicate this goal from being achieved, which leaves you questioning even until the end whether or not this basic objective will be accomplished.

The coolest thing about this book is, by far, the powers that each of the six main characters have and how they interact with the world around them, and accomplish their objectives, using those unique powers. These are not your typical stock superpowers like super strength, invisibility, flight, telekinesis, or regeneration. Instead you have things like breaking electronics, controlling the emotions of large crowds, being able to see through other peoples’ eyes, having a voice that knows the right things to say…some of the time, and being able to “disappear” by being forgotten the moment they look away from you. There is one thing they all have in common: they were all born in the year 2000, thus the name Zeroes.

I loved the dynamics that groups played upon the powers throughout the story, where most powers got stronger in large crowds while others might work best one-on-one. The unpredictability of things, not only the powers but also the decisions and the way events unraveled, made this an interesting and exciting read. The entire book flowed well and made sense, beginning to end, which made for a completely immersive experience. That is exactly what you want from a fantasy book. Westerfeld, Lanagan, and Biancotti deliver an impressive novel that feels seamless from beginning to end. Unlike some other collaborations, there was no clear shift in quality or tone to indicate one of the other authors was writing. And that is what you hope for in a collaborative package.

The cover and title have been revealed for the second book in the series, which I will be sharing here for my readers on Friday the 26th. I can’t wait for September to come so I can pick this story back up and see what happens to these six Zeroes next!